Oh, Canada. How I Love Your Craft Beer Scene

In June of 2015, my sweetie and I embarked on one of our beer-cations. This travel concept has grown, people no longer look at us like we are insane, at least most people, when we answer “beer” for the reason we are traveling to a particular place. We do love to immerse ourselves into a new culture, new foods, new sights, and see popular historical attractions because, after all, most drinking establishments do not open before lunchtime. This time our travels took us to Canada, specifically Ottawa, Montreal, and Quebec City. All places that I have not previously been. 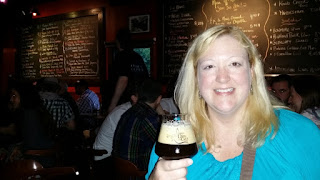 Craft beer has certainly become very popular in Canada in genera. In Ottawa for example, we went to one restaurant and bar, The Arrow and Loon Pub. They had about twenty-five beers on their draft list, and all of them were local or regional Canadian beers. They were, for the most part, delicious and well-crafted. This became the theme as we traveled to different brewpubs and breweries in the general area one of my favorite being Les Brasseurs du Temps where we took part in The Clock which is their circular sampler of all their drafts -- about fourteen that day. I liked some of the beers better than others, but they were all delicious and well-brewed. We also sampled beers from Nita, Whitewater, Cassel, KIschesippi, and Broadhead as well as visited brewpubs such as Big Rig, Mill Street, The Clocktower,  Microbrasserie-Bistro Gainsbourg and Les 3 Brasseurs (which also has locations in Montreal and Quebec City).

From Ottawa, we traveled to Montreal. The timing of our trip coincide, on purpose, with the Festival Mondial de la Biere. We enjoyed the fruits of the VIP section which allowed us to sample many beers from the region and around the world without having to worry about tickets. We also sampled many cask beers in a cask event run by TIco, Teklad Pavisian, of Benelux Brewery. Not only did we meet Tico, a wonderfully passionate brewer, but I also met a phenomenal cider maker-Marc-Antoine Lasnier from Les Vergers de la Colline. He had a brett cider on cask that would stand up to any brett beer. For you cider detractors out there, there are ciders that do not taste like soda. Along with the festival, we wandered around town checking out all of the great brewpubs like Dieu du Ciel, Benelux (which has two locations), Le Cheval Blanc, L’ Espace Public-Brasseurs de quartier, and others. 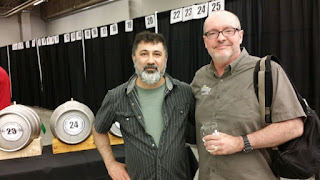 We bid our new friends in Montreal au revoir and moved on to Quebec City. If there had been no good beer in Quebec City, it would still have been worth the visit. It is beautiful, and built on more and steeper hills than San Francisco! The Architecture and sights were amazing. They did, however, have good beer. Brasserie-Artisanale Le Souche stands out as one of my favorites along with the bar/restaurant Le Projet. The food we tried was very good... even the poutine for which this region is famous. We had a poutine with a beer gravy at La Souche... definitely comfort food. It went very well with the beer.

I would say that I will visit this region again and perhaps take along a few fellow beer travelers to share. Everyone made a “blanche” beer, and I do mean everyone! They did them well too! They did not mind too much that our French was limited...very limited. The people we met were friendly and welcoming and eager to share their craft with two, not so crazy, beer travelers. Remember, my friends, life is short. Eat well and drink good beer!
Posted by Beer Wench Georgia at 9:54 AM