Burgeoning Beer Scene in France: Brittany and Normandy Part I

People all over the world associate France with wine, and
France has earned this reputation. Wine remains currently the most popular beverage for many French citizens and travelers who visit the country; however, there is a craft beer revolution quietly making its mark. Years ago on a trip to Paris, the only beers we could find were some Bier de Gardes and Belgians. Times have changed.

I recently returned from a trip to Brittany and Normandy. We flew via Istanbul, Turkey into Lyon, France which began our
beer journey. We found quite a few Belgium beers still, but at a cute little cellar bar, Les Fleurs du Malt, we found beers from a couple of craft breweries that are doing some interesting things including smoked porters and sours. The focus of the beer portion of our trip was actually Brittany, but before we hit our destination, we made a stop along the way at Brasserie Artisanale du Bouffay. We were charmed by Pierre, the owner, who is a former farmer and passionate brewer of beer. He started as a home brewer - not a unique tale - and moved on to commercial production. He believes in making beer that he loves to drink, and having tried his organic blond and tripel at the brewery, he is doing pretty well. According to Pierre, there are approximately 600 registered craft brewers in France. The trick here though, according to another source, if you want to brew beer (home brew or commercial) you have to register. So many of the registered brewers are not making a living at brewing; although many sell out of their garages and at markets. Pierre sells his beer at the brewery and through a distributor as well. He also has a contract with some Whole Foods in the U.S.

Having begun our journey into French beer, we moved to our first destination, Brittany. There is so much ground to cover that the best thing to do is find a central point to make home base and travel out from there. Of course, you need a rental car for this, but there are many things you could not see otherwise. We chose Huelgoat as our base of operations. Huelgoat is an adorable town with a large English population and tons of hiking trails for working off all the food and beer. We stayed at a cute little B&B called Laura's Chambres d'hotes.

Although we found many wonderful bars and pubs to sample French craft brews, the best beer part of this trip was a beer festival. Yep, you read it correctly. We found a beer festival in Brittany, France. It was hosted by Brasserie An Alarc'H and set up somewhat differently than our fests in the states. There was no entry fee. Breweries brought drafts and bottles. You paid 2 Euro for a a sample glass and could sample whatever the breweries at brought, but you could also pay for full pours and buy bottles of beer to take home. The variety was fairly impressive. The hosting brewery's beers, one of which was infused with ginger, were quite tasty, and there was even a real ale brewery serving beer out of casks, Les Fous Microbrasserie, which we actually visited the day before. It is on a farm in the middle of the Brittany countryside run by a husband and wife team, Don and Trisha. Another favorite brewery of mine had a bit of a heavy metal set up with a dry-hopped pale ale that was exceptional, Couille de Loup. Although, all of the breweries had some basic styles most of the did, including blondes, ambers, browns, etc, some did branch out with Belgian whites, alt beers, and fruit and spice flavors. The festival even included a food truck and the first organic toilette I have ever seen which used cedar mulch instead of chemicals.


Brittany itself is a beautiful region with coastal towns and inland farms. The people are friendly, and the food is delicious! In fact, some of the best seafood I have ever had, I found on this trip. If you are interested on more details or want to plan a trip yourself, contact me with questions. I could write pages on this region alone. Part II of this article will focus on the ciders of Normandy! In the meantime, remember to eat well and drink good beer.
Posted by Beer Wench Georgia at 11:16 AM No comments:

Beer in the Garden of Good and Evil

What comes to mind when you think of Savannah, Georgia? Do you envision beautiful trees filled with Spanish moss, amazing architecture, River Street, or a certain book/movie set in one of the most gorgeous cities in the state? To be honest, I see all of those things and more. I love strolling through Bonaventure Cemetery, people watching as I walk through the squares, eating steamed oysters, listening to music at Kevin Barry's, and enjoying some local craft beer. Yes, that's right. The craft beer scene in Savannah gives you one more reason to visit that magical town on the river.

A friend of mine and I recently took a girls' trip to start off the summer and visit some of the awesome breweries in town. We started the beer portion of our trip at Moon River Brewing Company. Moon River opened its doors in 1999, so it is the original craft beer destination in Savannah. Still brewing fun and tasty beverages, this brewpub is a great place to grab a bite to eat and soak in some local flavor. With great brews like Swamp Fox IPA, Da Bomb dry Irish stout, and Wild Wacky Wit, you can not go wrong. We had the luck to run into one of the owners, John Pinkerton, and head brewer, Aaron Deist who honored us by taking us on a tour of their barrel room and giving us samples of a few new beers in the making. I do declare, it was the tastiest start to a great trip. Get down there soon, as a marvelous Berliner Weiss will be going on in a couple of weeks.

With a beer to go, we bid the folks at Moon River a thankful farewell and headed for our next adventure. About three miles out of town (and totally worth the Uber fare), sits Coastal Empire Beer Company. Spearheaded by brothers, Kevin and Chris Haborak, Coastal Empire is the epitome of a local, small craft brewery. Because the facility is tucked away in an industrial park, you may think you have gone to the wrong place, but don't turn away. Inside their brewing space, these guys have plenty of room to grow and a tasting room for you to sate your thirst while learning about their brews. There is literally something for everyone from their Tybee Blond to the red wine barrel-aged Midnight in the Garden. You will enjoy choosing your next taste. Thank you Kevin for introducing me to "Pink, Fluffy Unicorn." Next time you are in town, go show these guys some love. After closing down the tasting room, we decided dinner was in order as well as a round or two of Irish music.


In our wanderings, we found a few surprises not totally beer related. At the Savannah Bee Company, you can taste a flight of mead, the oldest fermented beverage in the world. If you are more into wine than beer, you can taste a flight of Georgia wines in the cellar of The Salt Table. We also enjoyed barley's other incarnation with a tasting flight of single malt Scotch at Molly McPherson's which also boasts a good craft beer list as well.

After a day of sightseeing and various other tastings, we wandered down River Street to Service Brewing Company which was a perfect spot to check out on Memorial Day weekend. Owners, Kevin Ryan and Meredith Sutton hold a special place in their hearts and brewery for our service men and women. Their pride shows in the brewery's American flag painted as a back drop for to the music stage and the service patch art installations. The names of the brews also show the respect and love given to those who serve. My two favorites were Battlewagon (an imperial IPA) and Old Guard (a bier de garde using Savannah Bee Company honey).

Meredith gave us an incredible tour, introducing us to her bees which provide honey for some of their brews. We also met brewery cats Blackhawk and Chinook, who keep watch over the entire operation. This is a couple who believe in hard work, community, putting out quality products, and honoring those who work to allow us to enjoy a good brew with friends.

When you think that the end is near, do a double take. There is yet another brewery on the mission to keep Savannah from being thirsty for good beer. Southbound's theme is music, and they use hop head Kokopelli figures as their logo and beer names that honor songs and musicians like Hoplin, an homage to the late Janis Joplin, and Roxanne, a sour cherry ale. She may not need to put on her red dress but she does wear it well. Food truck outside...good beer inside...what else do you need? Thanks to out to Carly for setting us up and to Natalie for being such a great hostess. 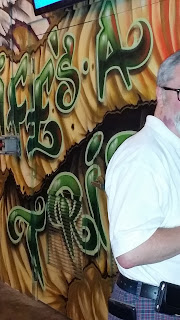 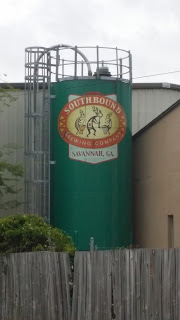 If you do all the brewery tours and are still thirsty for good brews, there are several great venues for local, national and international beer including Crystal Beer Parlor, The Distillery, Savannah Taphouse and more. I have to count this girls' trip an absolute success and can not wait to go back to one of my favorite beer-cation spots.

On a final note, I had planned to write this article as a counter to the recent piece about a brewery brewing beer for women, but as I talked to everyone including women, like myself, enjoying good beer, I realized that there was no point. If you make good beer, people will drink it - male or female. Most beer industry folks know this. To condescend that women have to have special beer made for them or marketed to them is ridiculous. This beer woman has been enjoying craft beer since 1993 when I was introduced to beer with flavor and different styles. Whether you are man or woman or somewhere in between, you can find great beer. The beer community is as diverse and flavorful as the multitude of styles brewers can imagine. Cheers to all the ladies that I met in the research for this article and the breweries who welcomed us with open arms to share their hard work and dedication. Remember, eat well and drink good beer.


Posted by Beer Wench Georgia at 5:23 PM No comments: