What a long, strange year it has been. Not being able to travel and be out and about has made it tough to find good material. Now that I am fully vaccinated, and hope you are too, I am slowly getting back out into the world. For my birthday, my SO and I visited Louisville and Lexington, Kentucky to check out some distilleries and a few breweries along the way.  Today, I chose to highlight three of the distilleries we enjoyed. 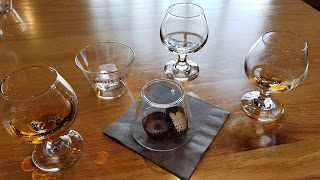 Angel's Envy: Founded in 2006, Angel's Envy has received wide acclaim. We participated in a tasting (along with a bachelor party) at the distillery which included a small chocolate tasting as well. We tasted three bourbons and two chocolates (white and milk). Their bourbons have notes of caramel, vanilla with a touch of citrus on the nose. Fascinatingly, their name came from terms used in the bourbon world. Natural evaporation occurs while the whiskey ages in the barrel. They call this the angel's share. What is left in the barrel at bottling is what the angels did not get. The distillery calls this Angel's Envy. The distillery staff are knowledgeable and friendly. I am a fan an usually keep a bottle in my cabinet. 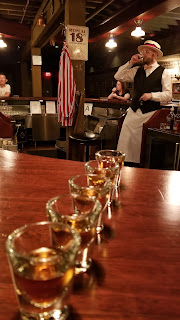 Evan Williams: Although originally founded in 1783, Prohibition put a stop to most distilling, so there was a hiatus. Williams (part of the Heaven Hill brand) has been distilling continuously since 1957. They age their bourbons typically 4 years. The minimum age requirement to be considered straight bourbon is two years. We enjoyed their "Speakeasy Experience" which requires knocking on the speakeasy door and saying a password before being allowed in. The bartender is in period attire and delivers you back in time to a twenties Speakeasy while sampling an array of the brand's bourbons. This tasting was fun and informative as well as being very tasty. If you are planning a trip, definitely include this one on your itinerary.

Peerless: Founded in 1889 by Henry Kraver, it was revived in 2014 by Kraver's great-great grandson Corky Taylor and his son, Carson. Distilleries are issued a plant number when registering for their license, they were able to have their original number reissued to them through quite a few legal hoops which leads them to have one of the older (and smaller) numbers. They distill under the DSP-KY-50. Their bourbons are bottled between 4 and 6 years depending on the master distillers tasting notes. Unlike most of the distilleries, they use a column still instead of a pot still. They, along with Angel's Envy, use a local cooperage, Kelvin, for their single use barrels. They have a  number of complex ryes and bourbons that have become some of my new favorites as I had not had tasted any prior to this trip. You can buy the ryes in Georgia; they are working on getting some of the bourbons into this state. As a special note, they have a distillery cat named Rye, who is a hardly working calico who adores head rubs and back scratches. 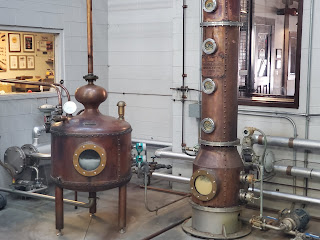 You may see bourbons that have beer barrel finished or wine barrel finished on the label. To be bourbon, the distilled liquid must be aged in a charred barrel which can only be used once. Once the right amount of time has passed and the liquid is considered bourbon, it may be "finished" in another type of barrel. The once used barrels are sold to Scotch and other beverage distillers which don't operate under the same confines.

We were a bit limited as right now many places in Kentucky are still practicing Covid-19 safety; so we had to really plan our trip and reserve spots for tastings and tours. If you are planning a trip, keep that in mind. We were able to do most of what we wanted in terms of pubs and restaurants as well. Travel safely and remember to eat well and drink good...bourbon.

Posted by Beer Wench Georgia at 12:32 PM No comments: