The Ciders of Normandy: Brittany and Normandy Part II

In the craft beer world, cider is still often considered a disruptive interloper at worst and a drink for people who don't like beer at best. If your only experience with cider are some of the mass produced, soda-pop, and one-dimensional ciders most often seen in the market, then I can understand that point of view. However, cider is an old tradition in other parts of the world where the product is complex and interesting and very tasty. It is a tradition that is slowly making its way to the U.S.

My first introduction to cider which drinks well on its own and pairs well with food ( outside of my own home brew) was in England when I tried cask ciders for the first time.  They tasted closer to the ones I made at home, and I knew that there were more like them. My second taste of well-crafted cider came at one of my local watering holes where I tried Etienne Dupont a product of Normandy, France. It is slightly sweet but with beautiful floral notes, earthy qualities, and a great balance of apple in the nose and in the aftertaste.

Normandy, France carries a strong tradition of cider-making that goes back centuries. Although, for most people, the WWII D-Day invasion is the first thing that come to mine when they think of Normandy and for good reason, there are other reasons to visit this area. After reliving history, marveling over the effort that went into saving the world from disaster, and shedding a tear or two over the individual sacrifices made, a person really could use a drink. What better than immersing yourself in a a piece of history that is also very tasty.

Most of the cideries are on small working farms while others are much simpler operations. Every cidery we visited had a dry (brut) a semi-sweet (demi sec) or a sweet. They also all made Calvados (distilled apple juice) and Pommeau (Calvados mixed with apples juice consumed as a sweet apertif).

Although we tasted  many wonderful ciders, the family making some of the  most innovative and flavorful ciders is Famille Dupont which has been on the same site wince 1887. We had the the good fortune of having fourth generation owner, Jerome Dupont, give us a private tour and tasting.  According to Jerome, cider is still, for some, a peasant drink. Most French prefer the wine for which the country is very well known, but people are slowly discovering this craft tradition, and Dupont is delivering.

Dupont is one of the very few cider makers actually well-distributed in the U.S, so, yes, you should be able to find some of their products if the distributors in your area carry them, and the labels are a bit different in the U.S. Although, I believe they are in the process of making them all more uniform. They are imported by B. United International, Inc. With their importers encouragement, Dupont has expanded their line of ciders beyond the typical three. 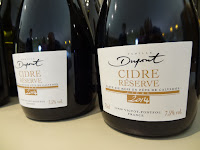 Although most ciders are a blend of sweet, tart, and bitter apples, Dupont has worked on special blends and even using the tart and bitter apples on their own. One of my favorites, Cidre Triple, is made with only bitter apples. It mimics some of the flavors of a floral, hopped beer. Their classic cider, Cidre Buche, is sold under the label of Etienne Dupont in the U.S., and named after Jerome's father whom we were delighted to meet on our tour. Etienne still oversees the making of the Calvados since the distilling process is an art form in itself. Another favorite of mine was their Reserve which is aged for six months in Calvados barrels. These ciders are flavorful, complex with a range from dry to sweet. The care in the apple choices and flavors show in the final products.

Making cider requires as much agricultural knowledge as it is a brewing craft. We saw a new field of apples trees. They were ordered from the grower two years prior. Once the saplings reach two years they are delivered and planted, but it will be three more years before they produce apples. And although some cideries grown some and use outside sources for apples, Dupont grows acres of apple trees for their ciders.

The fermentation of the cider starts with the natural organisms in the fresh pressed juice (wild fermentation). Most cideries leave it at that. Dupont starts all of their ciders out this way, but have isolated certain strains in yeasts for the flavors that they want which are introduced later in the process depending on the cider. They also use epoxy fermenters with movable lids to control oxidation in the different stages of fermentation. They are dedicated and passionate about making a delicious product.

Much like the craft beer community, the cider makers work together, Dupont is part of an association of growers that share equipment from apple pickers to sorters due the cost being so high.

In the restaurants around Normandy, you can usually find at least one cider on draft and in bottles, both small bottles and Champagne style at very affordable rates. The flavors pair incredibly well with food, and there is even cider cuisine. I have plans to recreate some of the dishes here at home. I will let you know how it goes.

The countryside of France is spectacular, and the discoveries you can make are immense. If you can't make it France, look for some French ciders in your area. If you have a local cider maker, support them even if it is outside your comfort zone. You have only deliciousness in your future. As always, eat well and drink good...cider.

Posted by Beer Wench Georgia at 10:46 AM